...
When we first moved into this house in April last year I wrote briefly about the crows that came to eat any scraps I threw out for them. Today I realised that I've never updated on our charming crow family. Unfortunately I have virtually no photographs. The crows are not happy about cameras and fly off the moment I pick up anything. Since we live in a farming area where crows are shot by farmers it's not surprising that they're so wary. They're perfectly happy to come down in our garden when we're around, but not if we pick up cameras, binoculars... anything the crows don't recognise as food!

Since I moved to Scotland six years ago my life has been full of crows. The first house we lived in we had a single crow that mimicked the seagulls. I have no idea why as both the crows and the gulls hated it and would chase him away when he did so. Was he a bit mad or did he just enjoy the joke? I have no idea! From there we moved twice (renting is a pain) to houses where crows dabbled and dallied, but it's only been since living in this recent house that I've had a chance to watch crow family behaviour up close.

We live bang in the middle of a territory claimed by a pair of crows. They seem to own about two farm fields, our house and a strip of wilderness along the road. Theirs is a "mixed marriage". It's taken me months to figure out who was who. Mr Crow is a gorgeous sleek black Carrion Crow, but his wife is a Hooded Crow. I haven't any close photos, but found wonderful illustrations on the RSPB website. 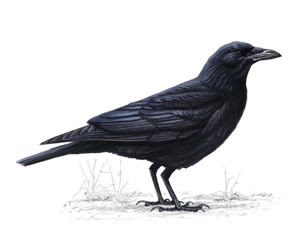 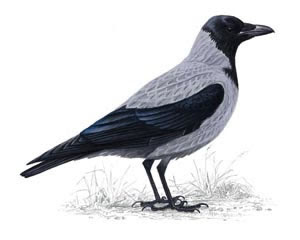 Last Spring/Summer they had one chick, a rather mottled Crow Junior. It is now January and Crow Junior is still living at home with his/her parents. Admittedly the "teen" is a bit rebelious and doesn't always follow orders from his/her parents, but they're still a close-knit family group.

When I put out food the ritual is this - Dad Crow comes in close and sits up high to watch for danger. Mom Crow flies low and fast across the garden to see what's on offer. If she likes what she sees she goes to her partner and calls. He calls in junior who sometimes refuses to come over. Then Mom flies to wherever he is and yells at him. Mostly he comes over if she yells at him!

If it's a little food they each take their share. If it's a lot Mom and Dad Crow take the extra and bury it for later in several stash places - in the corner rockery, in the field and in a small fenced off patch where the seagulls never go (too overgrown). The gulls are BIG here and very agressive so the crows have to act fast as they are no match for the bigger greedier gulls.

The only time they will take on the gulls is if the crow clan gathers. If they can get together twenty or so crows then they will chase the gulls or any other birds, off their land. Interestingly they never chase off their "cousins" - the Jackdaws and Rooks.

I love it when the Crow clans gather to fly. They are a delight to watch. Seagulls soar over us in perfect spirals, geese stream past in tidy skeins and regimented V formation and even the small birds fly in some kind of tidy order, but not the crows. Crows flying in groups mess about too much. They tease, they chase, they veer off to look at something and nearly bump into each other. There's no group mind-set where everyone flies synchrnised, like the gulls and the geese. Each crow is an individual doing his own thing.

They're silly, happy, loud and messy... they're NEVER tidy. I love that and I love the way they make flying look fun. Not beautiful or graceful, but just messy-flappy zip and zoom duck-n- dive FUN. :-) I can't watch crows flying without wanting to laugh. Eagles leave me in awe and swans flying make me want to cry because they are so beautiful, but it's only when I watch crows playing in the sky that I wish I had wings.
Posted by Michelle at 12:11