NATURE
The biggest event Nature staged in December was the amazing frost and ice that the below freezing temperatures brought us through Christmas to the new year. This photo below was the view from our house, across the frozen icy fields, on New year's Eve. 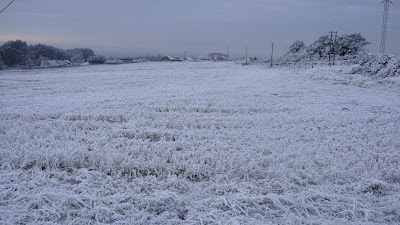 ENTERTAINMENT
We never went anywhere in December, it was too cold and since some of my in-laws were ill there wasn't any incentive to visit anyone and pass along germs! So we stayed home relaxing was exactly what we all needed. We watched TV and DVDs, ate snacks and now and then made short trips up to the shops to buy the last Christmas bits or basic groceries. The closest we came to entertainment was New year's eve when the towns around us lit fireworks at midnight and we all sat in the house watching them through the windows.

WISE WORDS
My favourite quote for the month, with one important twist - they have to be words from a fellow blogger! My Wise Words choice for December come from a friend and fellow blogger, Jean-Jacques of Gypsy Cafe:

"To travel is to evolve when travelling is consciously used as the vehicle to go beyond personal borders.

To evolve is to always attempt to shift the borders of our own limitations beyond their current borders.

To evolve is to expand our life experiences in order to learn more from life beyond the borders of the conventional.

To evolve is to continue facing our fears and to overcome them beyond the borders of the limitations they have imposed on us.

To evolve is to become autonomous in our thoughts beyond the borders of collective thinking and conditioning."

SPIRIT
To me the greatest wonder of this time of year is the ever-repeated mystery of life-death birth-rebirth. In every religion, and in nature itself in the Northern hemisphere, there is the theme of endings and beginnings: the longest night in winter heralding the death of the natural year that reminds us of the coming rebirth of spring, several different versions of new year (depending on your religion or culture), and interwoven in all that the story of a child being born to die physically so no-one should ever die spiritually. 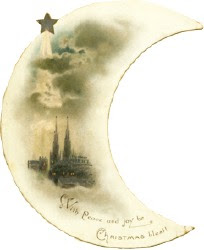 FAMILY
Not much to report. It was a quiet Christmas. A cousin in England sent me a Christmas card saying he'd been on holiday and found the grave of my great great great grandmother in Istanbul, but he never said if he took photos! :-( I keep meaning to write to him and ask, but I know he never reads his email, so it'll probably be better if I write an actual letter... yuck! I'm so out of writing, having had email for nine years.

LOVE
Hubby bought me a wonderful surprise for Christmas - a new monitor. It's one of those flat screen things and almost as big as our original TV! It's wonderful. :-)

ANXIETY
The biggest December anxiety was in early December when both mom and I realised we'd bought clothing gifts in the wrong sizes. There was a mad dash back to the shops the next day. Thankfully we were able to sort them all out and everyone got gifts they could wear.

SMILES
Smile of the month is this sign I was sent in an email. I'd love to know what animal it was written about. Obviously it's a very sensitive, or irritable, animal! :-D 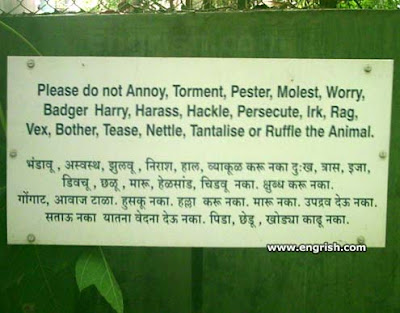 HOME
I'm posting a photo for this portion, one that I think sums up the word home for December - hubby and dad washing and drying the dishes. Nothing more thrilling to a woman's heart than men getting domesticated. ;-) 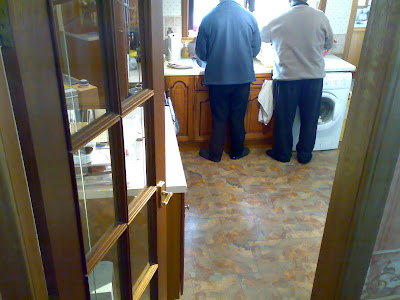 Love your hubby/dad picture. I took a similar picture of my own Dad as I watched him attempt to cook breakfast once at our Thanksgiving gathering at the cabin. It was a classic. Thanks for the chuckle.

WOW, your snowy/ICY picture is amazing - I'm glad I don't live there. I'm such a wuss.

I love snow, but I think I am too old to adjust -- when I was young I lived in it. But it doesn't snow where I live.

tsduff
I took a photo years ago of my dad hanging laundry wearing an apron. It was brilliant, but I think I'd be deceased daughter if I posted that one! ;-)

Amias
Thank you. :-)
I got the idea for NEWSFLASH from another blogger, Jeff. He did a few different word choice like S for SPORT, which doesn't interest me. I try to post a newsflash once a month or every season. I find it also helps me focus my own brain on what I've got from that month.

HO HO HO HO HO HO...Today I secretly hoped hubby would do the dishes after I made pizza (there's always so much to clean after making pizza from scratch)...and I got my wish! I didn't even have to say a thing HA HA HA HA HA...:-D

I also wonder what animal it is hmmmmhhh...interesting he he...

This was very interesting to read, Michelle, and I loved the pictures. I especially like the men doing dishes. Give those guys a big HUG!!! :D

That icy field is amazing! I have never seen anything like that. As you know, there was a really cold morning when I was in London recently and I heard over the news about the northen part having really bad weather. That must be it! I would be indoors too, away from the cold outside!

Amel
Pizza from scratch? YUMMY! Home-made pizza is the best. :-)))

Daisy
I did as you requested. :-D

Ting
It is beautiful, but yes - it's much more enjoyable looking through a window in a warm room than actually being out there in that kind of cold!

What a nifty way to do a review! Is this a regular thing for you ... and do others participate? I enjoyed learning more about you through this enlightening post and I love your wintry header.
Hugs and blessings,