...
Sunday's picnic turned out to be quite an adventure! We went and picked up Hubby's brother, as he's been keen to try out his new binoculars, and set out for the Cairngorm mountains. The morning had been gorgeous and sunny, but as we moved towards midday the wind grew stronger and the clouds kept rolling by in waves of rain-to-sunshine. Thankfully we managed to park up and picnic during a sunshine moment. Pork pies, hard boiled eggs and salad vanished pretty fast! ;-)

We took a brief walk along the edge of Loch Morlich before heading up the mountains to check the view. It was VERY windy up there! You don't get an idea of that from the photo... 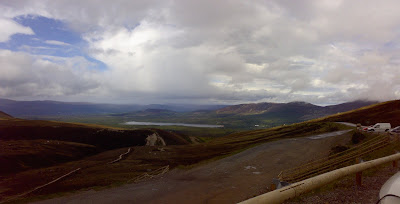 The noise of the wind was a howl outside the car and I really struggled to get the door open so I could stand by the rails and take this photo. I loved the way the clouds were changing over Loch Morlich in the distance, but it was too windy to stand there and take more pictures. I was really scared the camera might be blown out my hands. My brother-in-law was more sensible and used his binoculars through a half opened car window.

We stopped off for a cup of tea at Revack, where the Red Squirrels usually run about under the tables, but they were not coming out to play in all that wind and drizzle. I can't say I blame them. It wasn't pleasant weather, but we did get to see collared doves, coal tits and great tits taking peanuts from the bird feeders outside the restaurant.

After that we took a drive home via Loch Garten, where the Ospreys nest. They were sensibly tucked away in the trees, but... I did get to see an even more exciting (for me anyway) bird. As we drove through forests and fields I saw this big black bird near the edge of some trees. It had very bright red "eyebrows" - a male black grouse.

I've never seen one before... and he wasn't my last "first sighting" of the day either. That happened closer to home, after we stopped to take a few more photos of an old bridge across the railway line. I loved the difference between the cloudy/shadow areas and the sun on the railway tracks. 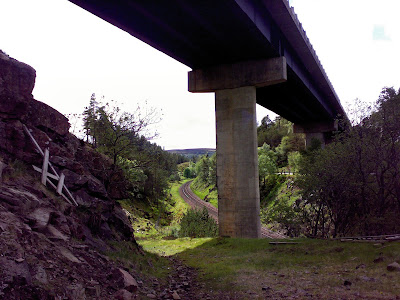 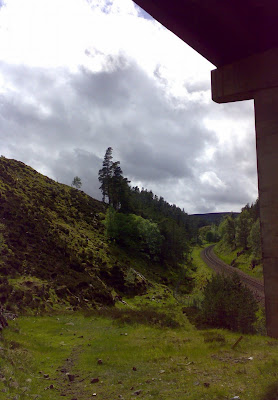 So, what else did I get to see for the first time? Well... we were nearly back in Inverness, passing through woodland, when a creature ran across the road. It had a long sleek brown body and a truly beautiful long fluffy tail. It was a Pine Marten! Too fast to even dream of taking a photo, but still a perfect ending to a very enjoyable day. After all that wind it took a dash of furry magic to really 'blow me away'. ;-)
...
Posted by Michelle at 18:06