More photos from our coastal drive last Sunday. You can find the coastal map here.

It is just... amazing! From the road you'd never think there was anything there as you driving along rolling green countryside, looking out to the sea... then the road veers North and... drops. We went down a a winding road where the land is dented by Nature into a deep 'V', like a giant fold in a big green blanket. There's a narrow track off this road that leads to the remains of the Church of St John the Evangelist. This church was built in 1513 to commemorate the defeat of the Danes at this site in 1004, in the 'Battle of the Bloody Pits'.

Even when you enter the village the road does not stop heading down. In the village itself the road zig zags down, between houses tucked into the cliff side so that some have stairs (or even tiny bridges!) to their doors. Other houses, as you wind down, lie below road level with just their roofs showing.

Here's a view from about half way down, facing the harbour. There were several yachts out. 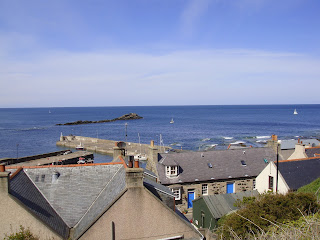 We took these photos from a tiny parking area, in front of these houses... 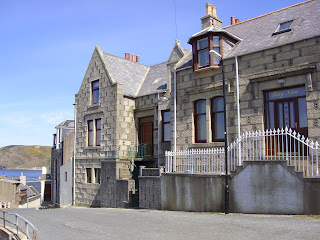 We stopped here and had our picnic, watching the yachts and the sea. You can see how the roads dips down to the right of where we were parked... 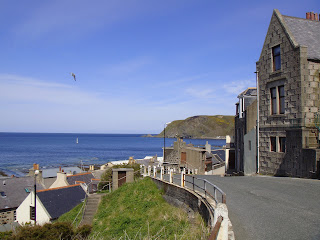 I joined all the photos together to give you a better idea of the view...

We took a quick look at the beach. It was shingle mostly, with a footpath hugging the cliffs for walkers. With warning signs about rock falls I can't say I'd go for a walk there! I'll show you that walk from the top of the cliffs further on. Wait and see! 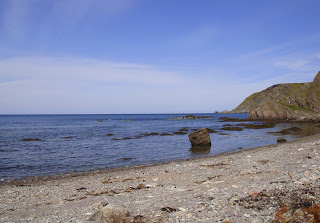 After we left Gardenstown we noticed a sign telling us there was a "viewpoint", so we followed the road through a farm and on to the edge of the cliffs above, and to the right, of Gardenstown. There were picnic tables and this huge old tree trunk set up as a marker. (you can see the 'dent' where Gardenstown lies to the left of this tree trunk. 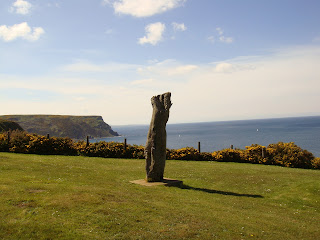 I took all the photos and made them into another panorama. Isn't that view just stunning? You can just see that walkway along the cliffs (from the shingle shore at Gardenstown) on the left, at the sea's edge. The man on the right, in blue, is my hubby - Sandy. :-)

Here's a closer view of that pathway... can you see the people down there?You might need to click on the photo to enlarge it. They are so far down they are barely visible. 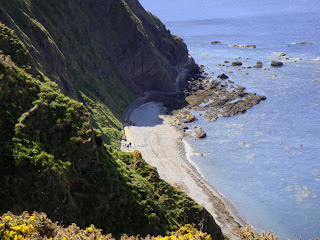 I went to look at what Sandy was reading. 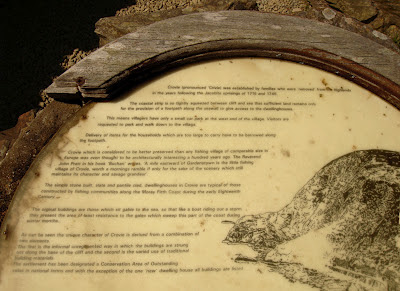 The Highland Clearances (Scottish Gaelic: Fuadach nan Gàidheal, the expulsion of the Gael) was the forced displacement of a significant number of people in the Scottish Highlands during the 18th and 19th century, as a result of an agricultural revolution (also known as enclosure) carried out by the British Government and Scottish landowners, such as the Duke of Sutherland. They led to mass emigration to the sea coast, the Scottish Lowlands, and the North American colonies. The clearances were particularly notorious as a result of the late timing, the lack of legal protection for year-by-year tenants under Scots law, the abruptness of the change from the traditional clan system, and the brutality of many evictions.

To stay near their homelands they hid themselves in caves and secret cliff villages... very much like this one. They had to hide themselves away, in fear of being evicted again, and suddenly swap farming for fishing. Can you imagine how hard that must have been? Looking down at Crovie it's easy to see how invisible places like this must have been before cars and roads. A testament to the strong sense of identity, and stubborn spirit, of the people of this country. They don't give up! 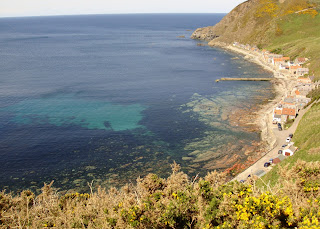 After Crovie we went on to Fraserburgh. I took some photos at the beachfront there. It was sunny, but the wind was strong off the sea and a bit chilly. 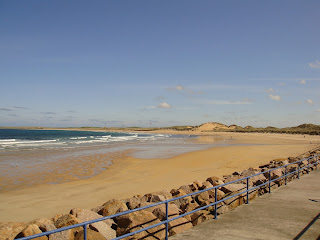 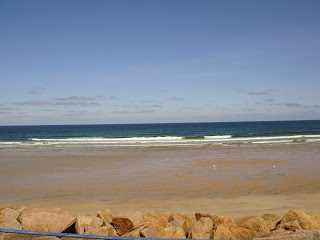 From there we returned home via Turriff and I completely forgot to take photos! Turriff has houses made of a local sandstone that is a deep blood red colour. Most unusual. I found an internet photo to share, of the town centre with their 'Mercat cross'. You can see the colour of the stonework.

A Mercat Cross iss a Market Cross. It's a marker standing in the market place, where the merchants of the town/village would gather. It would be where local news and important events were announced as well.