Recently I mentioned the old tradition of saying "rabbit, rabbit, rabbit" (or some variation of that) on the first day of the month. It's a good luck wish that probably has a very ancient past and it reminded me of an equally ancient trio of hares.
If you go into old churches and cathedrals in Europe and Britain you are quite likely to see a most unusual carved decoration... three hares in a circle.

They are often in a prominent place, implying that their symbolism was important... but what was the meaning behind the three hares? Some think it's a symbol for the Christian Trinity - three as one. Some think it might relate to the Virgin Mary, since the Hare was used as a symbol of virginity.

An even more interesting is the fact that some of the oldest examples are found in England, Germany... and China! Yes, the three hares, or rabbits, are used in ancient Buddhist and Islamic art as well.

Where do those three hares come from? I can't begin to guess and even the professional researchers are mystified. There's an ongoing research project collecting three hares photos and information here at the Three Hares Project website.


The Three Hares Project is researching and documenting an ancient symbol of three hares or rabbits running in a circle and joined by their ears which form a triangle at the centre of the design. The symbol is a puzzle for each creature appears to have two ears yet, between them, they share only three ears.
The Project has revealed the motif to be an extraordinary and ancient archetype, stretching across diverse religions and cultures, many centuries and many thousands of miles. It is part of the shared medieval heritage of Europe and Asia (Buddhism, Islam, Christianity and Judaism) yet still inspires creative work among contemporary artists.

They have some smashing photos of the three hares in Devon churches as well as others from all over Europe, Asia and  the Middle East.

What interests me is the similar link of three and rabbits/hares between the symbol and that first of the month good luck wish.

The hare is sometimes considered the animal linked to the Anglo-Saxon goddess Eostre, or Ostara. She was the goddess who gave her name to Easter and she was most likely a goddess of dawn, spring, fertility and new beginnings. She's often shown with eggs and hares, both symbols of fertility and spring. Some believe that hare became our more modern "Easter Bunny."

Wikipedia has some very nice quotes by Jacob Grimm, who researched old legends in Germany in the early 1800s. Grimm says:

"We Germans to this day call April ostermonat, and ôstarmânoth is found as early as Eginhart (temp. Car. Mag.). The great christian festival, which usually falls in April or the end of March, bears in the oldest of OHG remains the name ôstarâ ... it is mostly found in the plural, because two days ... were kept at Easter. This Ostarâ, like the [Anglo-Saxon] Eástre, must in heathen religion have denoted a higher being, whose worship was so firmly rooted, that the christian teachers tolerated the name, and applied it to one of their own grandest anniversaries.[7]

Ostara, Eástre seems therefore to have been the divinity of the radiant dawn, of upspringing light, a spectacle that brings joy and blessing, whose meaning could be easily adapted by the resurrection-day of the christian's God. Bonfires were lighted at Easter and according to popular belief of long standing, the moment the sun rises on Easter Sunday morning, he gives three joyful leaps, he dances for joy ... Water drawn on the Easter morning is, like that at Christmas, holy and healing ... here also heathen notions seems to have grafted themselves on great christian festivals."

The fact that the three hares symbol is found in English and German churches (Anglo-Saxon) does seem rather interesting.

Is the three rabbit wish, to start a new month, in any way related to the three hares and their ancient connection to a long-lost goddess of new beginnings? Is there a connection? We'll probably never know, but I can't help wondering... 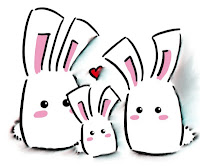