Ok, so this should have gone up on the 1st of the month, to truly be a "rabbit rabbit" good luck wish, but I forgot to download the photos in time.

We went out last Sunday, to a nearby Garden Centre and Tearoom and there... in the garden... we met a RABBIT. Not a rabbit - a RABBIT.

The garden centre has a resident mascot - a very BIG bunny. He's allowed to wander in and out the shop on his leash. He was very friendly, ready to go over to anyone who was willing to give him a pat or a scratch behind the ears. 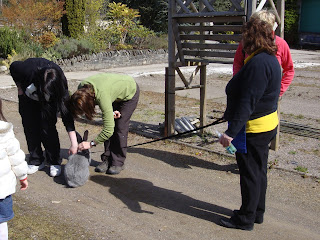 The lady holding the leash says that he lays out the rules of where they walk. You can see that in the next photo. It's a case of, "No, I want to go THAT way!" LOL 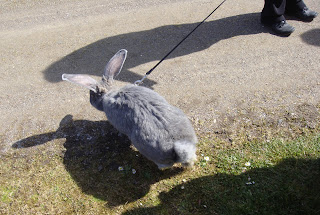 While everyone was fussing over Mr Rabbit an itty-bitty-kitty (half the size of that rabbit!) was trying very hard to win some interest. She walked between everyone, she lay down and waved her paws in the air, she miaowed... no-one noticed.

So Hubby went over and gave her some fussing. She was so pleased she purred and purred. 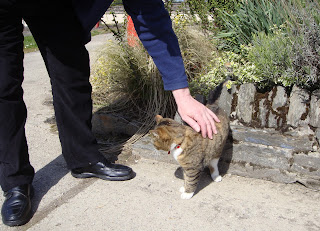 On the way back to the shop we saw Mr Rabbit chilling in the shade. Aren't those big fluffy toes just the cutest you've ever seen? 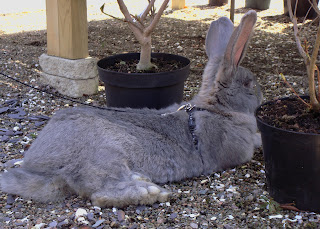